Island hopping in Alaska? Yes, you can! It might not be tropical, but it doesn’t make it any less beautiful. Alaskan islands are some of the most pristine places on the planet and they offer a brawny yet breathtaking playground for intrepid travelers.

The southern Alaskan islands that make up the Alexander Archipelago are a kayaker's delight. Featuring rugged coastlines jaunting in and out of countless bays, this group of protected islands is breathtaking. Making up a big part of this landscape is Prince of Wales, with nearly 1,000 miles of gorgeous seacoast. As the fourth largest island in the U.S., Prince of Wales packs in 2,230 square miles of adventurous fun for those who are up for it.

Paddle around the open ocean or take a more laid-back approach with a canoe excursion around the inland lakes. Hikers and wildlife spotters can spend days on hundreds of miles of trails and roads. Those who like to fish will be in their element with ample opportunity to catch the freshest salmon populating the ocean and streams in and around the island.

For one of the more unusual attractions, visitors can head to a viewing platform at Cable Creek Fish Pass or Dog Salmon Fish Pass. Here you can check out the Salmon climbing up foamy waterfalls or fish ladders while black bears linger nearby hoping to grab a snack.

With so much to do, it’s best to stay a few days on Prince of Wales. The lakeside cabins in  Tongass National Forest—America's largest national forest—are the best way to absorb all the naturally rich offerings of this prime Alaskan retreat.

Bottom line: Suited for the active and adventurous, Prince of Wales is one of the most convenient Alaskan islands to visit that also offers a wide range of nature-inspired activities.

Animal and wildlife-lovers - Admiralty Island is calling you! Travel north from Prince of Wales Island via seaplane and you’ll find yourself in the Land of Bears. Admiralty Island boasts 1,600 brown bears (the highest density in North America), making it one of the best places for brown bear-watching on the continent.

Admire the rugged mountainous scenery, lakes, rivers, and temperate rainforest as you head to the Pack Creek Bear Sanctuary for the best bear-watching opportunities. After a 1-mile hike, you’ll have the opportunity to view brown bears catching their daily meals of salmon from the stream. Kayakers won’t want to miss paddling up and down 32 miles of trails linking eight lakes within the famous Seymour Canal. Even if you’re not into brown bears or kayaking, the ample hunting, fishing, bird-watching, and photography opportunities will draw you in.

Bottom line: Admiralty Island is a total nature lover’s paradise with the majority of the island protected by its National Monument status.

Part of the Aleutian Islands chain that sweeps west from the mainland into the Bering Sea, Akun Island is an old-world, untamed land wrapped in natural bliss. The island is perhaps best known for its grassy and rocky landscape that now houses a population of wild cows. Except for the folks who herd these cattle, it is a mostly unpopulated island.

Another interesting aspect of Akun Island is its composition. There are several naturally-formed basalt rock sea caves that can be explored from the water. If you’re thinking about taking your kayaking to the next level, Akun Island is the place to do it.

Bottom line: This island is probably one of the least convenient to access as there is only one small airport nearby. However, if you want to leave the rest of the trailing tourists in the dust, hop this flight.

Here are five things you didn't know about the Panama Canal that might make you want to go back and check your old textbook. 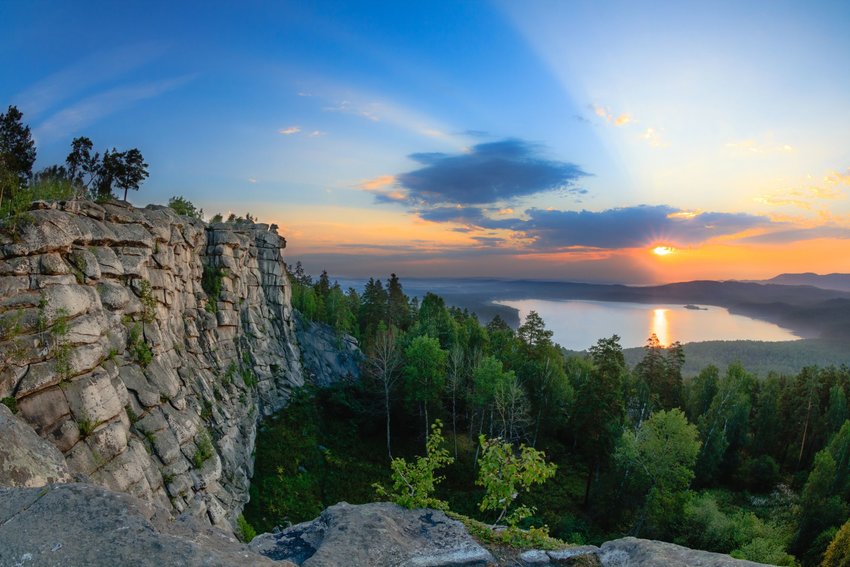 There’s a lot more going on in those mountains than a simple geographical border.